skip to main | skip to sidebar

Why Talk It Up America? 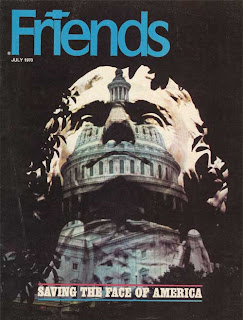 In 1970, I was working on my aunt and uncle's ranch near Cody, Wyoming. I had visited Washington, DC, the previous three summers and I had decided to submit a photograph of mine to Friends Magazine, a publication for Chevrolet owners, for publication on the Owner's Page. Because it was my uncle who owned the Chevy pickup, I used his name to enter my photo montage of the head of Thomas Jefferson from the Jefferson Memorial superimposed over the Capital Dome framed by tree leaves. To my pleasant surprise, the magazine sent a check for $175.00 (big money for a sixteen year old in 1970) and asked for permission to publish my photo on the cover of the July edition of Friends Magazine. The cover read, "Saving the Face of America."

Now, these were the 1970's--turbulent times to say the least--and it was a low point for America and American morale. My cousin had a GMC panel wagon with an upside-down American Flag decal on the rear window. My aunt scolded him saying, "The flag should only be flown upside down in times of distress!"

He replied, "If these aren't times of distress, then what are?"

I went on to college in the fall of 1970. I attended the University of California at San Diego's Revelle College, home of devoted communist philosophers Herbert Marcuse and Angela Davis. The Viet Nam War was nearing an end largely due to a major anti-war movement and the protests of the baby-boom generation.

After graduating in 1974 with a degree in Economics and Biology, I moved back to the family home town of Cody, Wyoming, and put down roots. My career path has been diverse and interesting and includes over 20 years of public service. I came to believe and embody what Winston Churchill once said, "If you are young and not liberal, you have no heart. If you are old and not conservative, you have no brain."

I now live in the Southside of Virginia. I retired in August 2008, from the U.S. Department of the Interior, where as a political appointee for 6.5 years, I gained extensive experience with the media. I have been subjected to vilification and lies by the likes of the New York Times, Los Angeles Times, the New Republic, Vanity Fair, and even National Geographic. I am not fooled for one minute into thinking that I was that important or anything I did was that newsworthy. But, having worked for Dick Cheney when he was Congressman from Wyoming made anything I did the subject of speculation, and for conspriritorial types, it meant anything I did must have been the result of orders from the White House. All pure bunk, of course, but for "mainstream" media, political agendas and the advancement of their philosophy trump truth, accuracy, and journalistic integrity. It is a sad state of affairs that should make you skeptical of everything you read.

I am determined to stand against the lies and overcome evil with good. Thus, I have created this blog--Talk It Up America--to post news consistent with Philippians 4:8.
--Paul Hoffman
Posted by Editor--Talk It Up, America at 5:49 PM

Editor--Talk It Up, America
Prospect, Southside Virginia, United States
I retired in August 2008, from the U.S. Department of the Interior where I served from March 2006 to August 2008 as Deputy Assistant Secretary for Human Capital, Performance, and Partnerships. Prior to that I was Deputy Assistant Secretary for Fish and Wildlife and Parks for four years.

I was born, raised, and educated in Southern California, but spent much of my youth in Cody, Wyoming. I lived in Cody for 27 years and have had a varied career. I have been a wilderness guide, a bartender, bank loan officer, State Director for then-Congressman Dick Cheney, and Executive Director of the Cody Country Chamber of Commerce.

Prior to moving to Cody, I graduated from the University of California at San Diego--Revelle College with a BA degree in Economics and Biology. I am a graduate of the Institute for Organizational Management and the inaugural class of Leadership Wyoming. I now live in the bucolic Virginia countryside and run Hope Springs Media, a publishing company that includes The Canaan Creed by L. P. Hoffman.